The Tokyo 2020 Olympics are going full steam ahead. Read our guide for how to bet on the world's biggest sporting event right here in South Africa!

Deal or No Deal Live is one of Evolution Gaming's most exciting and engaging Casino Games yet. Play Deal or no Deal online as if you were a real-life contestant on the show. The live online version of this world-famous TV show lets you play for real money and allows an unlimited number of players! 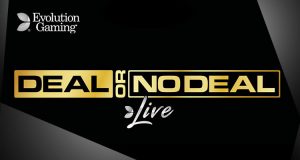 Join us on a walk through the Deal or No Deal online game by Evolution Gaming, see how it works and get some strategies to help you win!

The objective of Deal or No Deal Live is to predict whether the amount of money in the briefcases will be higher than the banker’s offer. By choosing to either accept or reject the banker's deal, you aim to get the most money possible.

As more briefcases are opened, the banker's offer will change according to the size of the remaining cash amounts. The more high-value cash prizes which remain in play, the better the offer from the banker will be.

How Does Deal or No Deal Live Work?

To give you a clear idea of how Deal or no Deal Live works, we'll explain the three rounds of the game and what happens in each.

In the time allowed, you must spin a three-reel bank vault and align the gold segments on the upper section of the wheel. You can adjust your bet size and the level of difficulty to your preference.

To increase your chances of qualifying, you have the option to buy one or two rings that will be automatically aligned to the top. The number of rings you buy will increase the cost per spin by 3x for one ring and 9x for two rings. 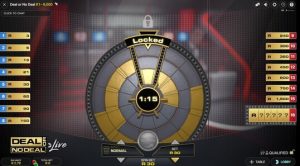 So what's this all for? Well, each spin increases the amount of money in the most valuable briefcase by 75x-500x your stake. The Qualification Round has a minimum bet of R1 and a maximum bet of R9 000.

After qualifying, a top-up wheel will appear on your screen. This allows you to increase your potential prize money by topping up the money in the briefcases by 5x–50x your bet. Choose your top-up amount and spin the wheel to boost the prize money inside any briefcases you want. The more you bet, the bigger the multipliers get.

But you don't have to top up the briefcases by betting money if you don't want to, the choice is yours! The Top-Up Round has a minimum bet of R1 and a maximum bet of R1 000.

Then it’s straight into the Deal or No Deal Live studio with your entertaining host and lovely "briefcase ladies". You are shown 16 sealed briefcases containing different amounts of cash. Inside each briefcase is a number between 1 and 16 which represents the sum of money shown on the left and right side of your screen. 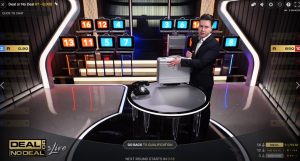 After each set of briefcases is opened, the banker offers you a cash amount in exchange for what could be inside the briefcases — and then asks you “Deal or No Deal?” Make your decision to clicking the option you want. If you don't decide within the allotted time, "No Deal" will be selected as your answer and the game will continue.

Your goal is simple: Predict whether the amount of money in the remaining briefcases will be more or less than what the banker offers you. If you think you can get lucky and win more than however much the banker offers, say No Deal". If not, then say "Deal" and take the money. 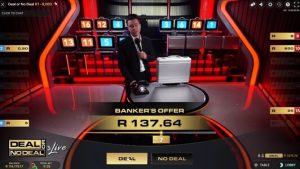 How to play Deal or No Deal Live on Betway Here's what happens in Deal or No Deal Live after qualifying:

Three briefcases are opened and you will be offered a sum of money by the banker. This is your first chance to choose "Deal" or "No Deal"! To accept the offer, click "Deal" and the amount will be added to your account balance. If you don't want to take the money, you'll move onto the next phase.

Four more briefcases are opened by the lovely ladies and the banker will make a second offer. The amount will either be higher or lower than the first, depending on which briefcases have been eliminated. To accept the banker's offer, click "Deal". If you don't want to take the money, choose "No Deal" and move on.

Four more briefcases are opened. Your third offer from the banker will either be more or less than the previous one depending on which cash amounts remain in play. To take the money, click "Deal". If you think you can get more by waiting, choose "No Deal" and the game will continue.

Another three briefcases are revealed. There are now just two remaining—one of these is on the host's table. The fourth offer from the banker will either be raised or lowered depending on which cash prizes are still up for grabs. This is your last chance to take the deal.

If you accept the banker's offer, you'll get the money and the game is over. If you want to claim the cash prize rather, there are two options: Either click "No Deal" and claim the prize in the selected briefcase or choose "Switch Briefcases" and claim the unknown sum of money in the host's briefcase.

After the game, you'll be asked if you'd like to go back to the qualifying round to play Deal or No Deal Live again.

Deal or No Deal Live Odds

Deal or No Deal Live has a Return to Player (RTP) percentage of 95.42%. So for every R100 that players spend on average, the game pays out R95.42 in cash prizes. This means the house edge is 4.58%. The RTP for Deal or No Deal Live is about average for Live Casino Games but lower than a game like Lightning Roulette which returns 97.10% to the player.

How to play Deal or No Deal Live on Hollywoodbets

1️⃣ Launch Deal or No Deal: Visit Hollywoodbets and select "Evolution Live Games". Click on Deal or No Deal. You’ll be asked to provide a screen name and then enter the qualification round.

2️⃣ Spin the wheel to qualify: Spin a three-reel bank vault and align the gold segments. You must align three gold pieces to progress to the next round.

3️⃣ Top up your briefcases: Pick any of the 16 cash amounts, place a bet and spin the wheel to make that prize bigger.

4️⃣ Enter the live studio: As each set of briefcases are revealed to you, choose to either accept or reject the banker's cash offer until the end of the game.

Where to play Deal or No Deal

Deal or No Deal Live is available at most online bookmakers in South Africa which offer Evolution Live Casino Games.

Some of the best betting sites in South Africa which offer Deal or No Deal Live include:

Deal or No Deal Live Strategy

While Deal or No Deal Live is an excellent Live Casino game, there are no watertight strategies that guarantee results. We do however have some recommendations when it comes to playing that might help you out.

Strategies for playing Deal or No Deal online

There aren't any shortcuts in this game. For the chance to win a big prize, you have to bet lots of money when topping up the briefcases.

The only guaranteed payout is the banker's offer. Remember there's always a chance you can lose it all at the end and walk away with nothing.

Keep a tally of what you've spent. Consider how much you bet in the Qualification Round and Top-Up Round when deciding whether or not to take the banker's offer.

Don't be too greedy. If at any stage the banker's offer is 2x what you've spent in total on the game, then you should seriously consider taking the deal.

Don't switch briefcases at the end. It's always tempting to swap, but at least you know exactly how much is in the open briefcase. Take the host's and you might walk away with nothing!

How much can I win on Deal or No Deal Live?

Deal or No Deal Live allows you to win up to 500x your original bet. The minimum bet size is R1 and you can win as much as R5 million (if you bet the maximum amount and hit the biggest multipliers in every round). Is Deal or No Deal Rigged?

No, Deal or No Deal Live has a built-in profit margin for the operator, so there's no need to cheat players. The game is 100% fair and regulated, which means you could win or lose depending on your luck that day.

Deal or No Deal Live is the ultimate in immersive casino gaming. For a taste of what it's like to be a contestant on your favourite game show, sign up with Hollywoodbets or Betway and start playing today. You'll get R25 free to spend on whichever games you like!

For more about online sports betting and casinos in South Africa, visit the Betting Guide homepage where you can find bookmaker reviews, promotions, betting tips and more.

Learn How To Play